About the Resident Coordinator Office 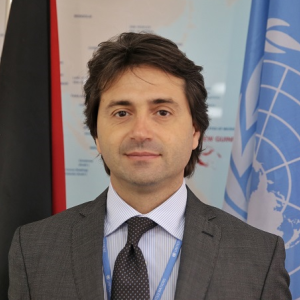 The Resident Coordinator leads the UN Country Team which is comprised of the representatives of UN entities active in Papua New Guinea. The UN Country Team is working together to capitalize on the strengths and comparative advantages of the UN System in-country, to increase impact through coherent programmes, as well as to reduce transaction costs for government and the UN.

The Secretary General’s General Assembly Resolution 72/279 on the repositioning of the United Nations Development System mandates bold changes for the emergence of a new generation of Country Teams, centred on a strategic Programme with the Government and led by an impartial, independent and empowered UN Resident Coordinator to deliver on the 2030 Agenda for dignity, prosperity and peace on a healthy planet.

Before being appointed as UN Resident Coordinator in the Independent State of Papua New Guinea, Gianluca Rampolla served as Director for Political Affairs at the UN Regional Office for Central Africa in Libreville, Gabon.

From 2007 to 2011, Mr. Rampolla was Head of the Office of the UN Resident Coordinator in Tanzania, and responsible for piloting the Delivering as One reform process.

From 2005 to 2007, he served as UNDP’s Chief Technical Advisor strengthening the capacities of the Government of Rwanda to manage foreign aid.

Prior to the UN, he worked from 2000 to 2005 at the Organization for Security and Cooperation in Europe. He held assignments on the Western Balkans and on Central Asia.

Gianluca Rampolla was born in Rome, Italy, and holds a Master’s degree in International Affairs from the London School of Economics. He is married and has one child.