The Provincial DRM Strategy and SOP for Milne Bay received technical inputs from the International Organization for Migration (IOM), and funding assistance from the United States Agency for International Development (USAID) Bureau for Humanitarian Assistance in its development.

This DRM Strategy and SOP is a living document that promotes the localization of the Sendai Framework (2015-2030) principles, contributing to strengthening resilience and reducing disaster losses. It defines the roles and responsibilities of the provincial government and its stakeholders in preparing for, and responding to disasters, including implementing recovery actions following a disaster.

“It is great news for Milne Bay to have its Provincial DRM strategy and SOP to better coordinate disaster risk reduction interventions and emergency response,” said Milne Bay’s Provincial Administrator, Ashan Numa in his remarks at the launch. He highlighted that there had been lack of coordination in DRM matters in the past and launching the DRM Strategy and SOP will improve coordination in in the province.

“The DRM SOP is a guide to help us better respond to emergencies and disaster with the support of our partners, and also provides a leverage to the Milne Bay Integrated Provincial Development Plan,” noted Steven Tobessa, Milne Bay Provincial Disaster Coordinator.

IOM in partnership with the National Disaster Center, continues to support provincial governments to strengthen capacities in DRM, through the Provincial Disaster Centres.

IOM recognizes inadequate funding and insufficient human capacity as a challenge during the implementation, and it remains committed and pro-active to supporting the province in risk management and disaster response. 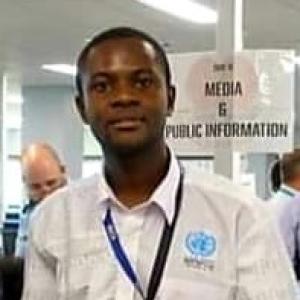